Physiology as a cornerstone

When is an athlete considered fit? When he or she is fast, has stamina and pedals at high wattage numbers? Well, being fit is certainly a question of individual aspirations and sporting goals, and thus a matter of definition.

But it can also be measured scientifically: by means of performance. Read on to find out what factors performance consists of, what is necessary to be able to perform and how performance is increased.

Training is defined as a sensible and planned alternation of load and recovery over several weeks, months or even years, with the goal of optimising the body’s systems. Such structured training improves the most important cornerstone of athletic performance: human physiology. This term describes certain processes in the body and plays an important role in the formation of performance. Let’s therefore take a closer look at physiology.

In triathlon, long-distance running and cycling, the goal is to get from A (the start) to B (the finish) as quickly as possible. To do so, the athlete must be able to maintain as high a performance as possible over the given distance.

But what is performance actually?

To define performance, there is a physical formula that some may still remember from school lessons:
Performance is the quotient of work done or energy per unit of time, or P = W/t.

Or applied to sport:
The more energy the athlete can convert, the higher his or her performance level.

The sources of energy turnover

Cyclists and triathletes have two main sources of energy at their disposal during physical training: Carbohydrates and fats.

They differ fundamentally in their main properties. Carbohydrates are quickly available for energy supply, but unfortunately the human body only has small storage capacities. Fats, by contrast, are available almost unlimitedly, however, they can only be converted into energy slowly and with great effort.

The body disposes of different metabolic systems to convert the energy from carbohydrates and fats into performance. All in all, there are three of them

These systems differ significantly in their performance and capacity, but they all provide ATP and can even resynthesise it. ATP, or adenosine triphosphate, is necessary for a muscle to contract. Without muscle contractions, there is no locomotion. Let’s therefore take a closer look at these “engines”.

The alactic system, based on the conversion of energy-rich phosphates, is by far the most powerful system and works extremely quickly. For one single jump or during the first few seconds of a sprint, the alactic system is the decisive one. However, high-energy phosphates are extremely limited. After just a few seconds of maximum intensity, such as during a sprint, they drop so significantly that the load must be reduced. For this reason, the peak in a sprint performance cannot be maintained for longer than a maximum of five seconds.

The lactic anaerobic system is responsible for high-intensity loads, such as attacks, sprints, or some fast rides over cobblestone passages, as it provides energy quickly via glycogen and without oxygen. However, this system does not completely break down the sugar molecules, comparatively less ATP is produced, but lactate may accumulate. This energy source is exhausted after a few minutes at high intensities, depending on how much lactate accumulation and the associated acidosis an athlete can tolerate. The lactic system could be seen as some kind of “antagonist” of endurance performance, as it

The most important energy-producing system in endurance sports is also the body’s least efficient: the aerobic system. It converts glycogen and fatty acids into energy by using oxygen. The parameter that describes the individual capacity of the aerobic system is the maximum oxygen uptake (VO2max).

Compared to the alactic and lactic systems, the performance achieved by using the aerobic system is comparatively low; however, the load duration is often higher and can be maintained for hours or even days, as is the case, e.g., in endurance sports.

The limiting factor of the aerobic system are the substrates, i.e., fats, carbohydrates, and proteins. Since fats, as described above, are almost “infinite” and protein is of hardly any importance in energy production during exercise, the glycogen balance is decisive. If glycogen stores are depleted, the aerobic system can’t work properly anymore and no longer provides sufficient energy for muscle contraction.

Compared to the human engine, hybrid cars have a decisive advantage: there is a switch to deliberately change between systems. Athletes cannot do this; in fact, all three systems are always permanently involved in locomotion.

The energy-supplying systems cannot be switched back and forth or on and off at will; which one is used to what extent depends on two factors:

The potential lies in working on better performance and optimising the energy-producing systems. This can be achieved through training. Though it doesn’t provide athletes with a switch to change between energy systems, they will still get some tools to use optimally for themselves.

Fitness and capability of an endurance athlete are best defined by the parameter of performance. A very specific one is essential: performance at the anaerobic threshold.

The anaerobic threshold is the state of the energy-producing systems in which the lactate production of the lactic system and the lactate metabolism of the aerobic system are in exact balance. The so-called metabolic steady state of lactate build-up and breakdown is thus in equilibrium. The higher the performance at which the athlete reaches this steady state, the better his or her performance.

There is one peculiarity, though: The aerobic system – defined by VO2max – increases linearly with increasing load intensity. Up to performance at the anaerobic threshold the athlete roughly needs to process about 12 ml of oxygen per minute per watt on the pedal. Unfortunately, the lactic system, which produces lactate, does not increase linearly but exponentially. Therefore, at a certain performance level both systems will intersect – that’s the anaerobic threshold.

The systems therefore do not only differ in terms of capacity and capability, but also in their progression relative to the exercise intensity. These progressions can be trained.

To become more efficient means to shift the performance at the anaerobic threshold upwards. There are two ways to do so:

It is desirable to make use of both options. For an endurance athlete with a very “consistent” load, such as a long-distance triathlete or a marathon cyclist, for example, the best possible optimisation is an aerobic system that is as large as possible and an anaerobic, lactic system that is as small as possible. This way, the systems intersect quite late, i.e., at high performance, which results in a high anaerobic threshold. 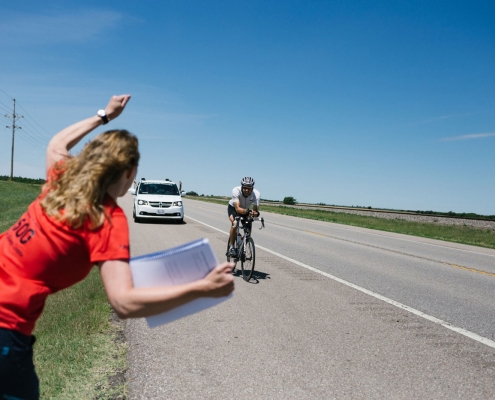 11. August 2021
We define coaching as the holistic performance optimization of an athlete. No matter if amateur athlete, ambitious athlete or professional ...
END_OF_DOCUMENT_TOKEN_TO_BE_REPLACED
https://hycys.de/staging/wp-content/uploads/HYCYS_Angebot_Coaching_Trainingsbetreuung.jpg 933 1400 b_geesmann https://hycys.de/staging/wp-content/uploads/hycys_logo_white-300x138.png b_geesmann2021-08-11 08:00:002021-08-11 09:24:59Coached by science – the HYCYS coaching system
The human engine – physiology as the key of performance